It’s a crossover matchup on the XFL gridiron to kick off week 3 of the schedule down in the Sunshine State. The Houston Roughnecks put their undefeated record on the line as they travel to face the Tampa Bay Vipers Saturday afternoon. Houston pulled out a 28-24 win at home over St. Louis Sunday evening in their previous contest. Tampa Bay fell 17-9 on the road to Seattle last Saturday afternoon in their previous contest. Will the Vipers be able to earn their first win in franchise history or will Houston roll on to a 3-0 start?

Houston’s offense has clicked in the first couple of weeks as coach June Jones hasn’t lost a step getting his offense to fire on all cylinders. The Roughnecks racked up 37 points in their win in the opener and followed that up with 28 more in the triumph over St. Louis last week. Both those games were at home for Houston so we’ll have to see if their success travels on the road. The Roughnecks didn’t have a big offensive showing in their win last week as they threw for 170 yards and ran for 78 while allowing 284 yards through the air and 126 on the ground. Still, when it mattered the most, Houston came up with the critical plays necessary on both sides of the ball to wind up with the victory. The Roughnecks forced two turnovers in the contest while not committing any to secure the win.

interceptions by our defense helped lead our team to victory over the Battlehawks.#ForTheH | #ForTheLoveOfFootball 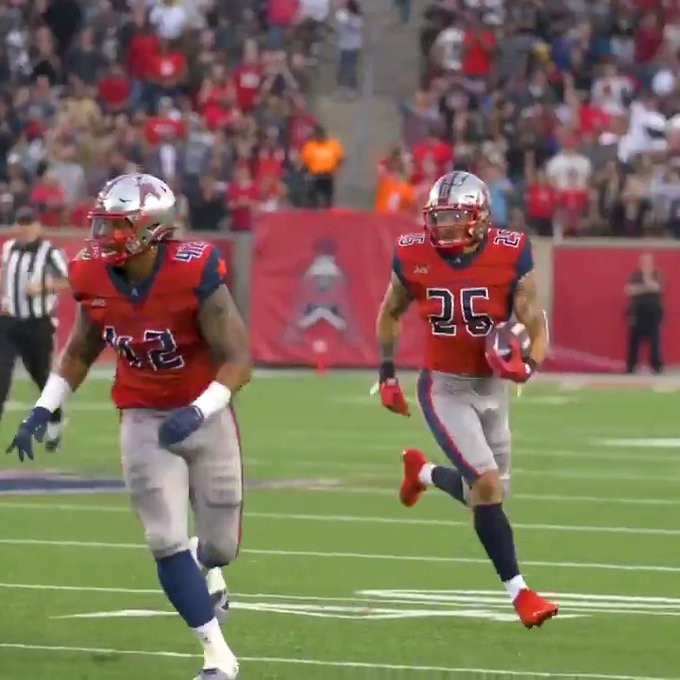 
111 people are talking about this
P.J. Walker has stepped right in as the starting quarterback after being named just a couple days before the season opener and responded. He has hit 43 of 69 passes for 442 yards with seven touchdowns and one interception so far this season. James Butler is the team’s leading ground gainer with 16 carries for 58 yards and two scores. Walker is next in line as he has run the ball eight times for 53 yards this season. In the passing game, Cam Phillips has reeled in 12 catches for 130 yards and a team-leading four scores. Three of those came last week in the win over St. Louis. Kahlil Lewis has caught nine passes for 95 yards and a score while Nick Holley has hauled in seven balls for 91 yards. There is no shortage of options in the aerial game in the Jones’ system of offense. Sergio Castillo has hit two of three field goal attempts this season with a long of 44.

Tampa Bay continued to sputter offensively as they were held in check by Seattle on the road. On the plus side, the team scored their first touchdown in franchise history but it didn’t come from the offense. The Vipers first touchdown came on a 78-yard interception return for a score by Tarvarus McFadden early in the third quarter. That gave Tampa Bay a 9-0 lead but they were unable to maintain that momentum. The Vipers gave up the final 17 points of the game to take the loss. Tampa Bay held a 289-199 advantage in total offense, picked up 19 first downs while allowing 14, and converted nine of 17 third downs while allowing Seattle to pick up just two of 10 third-down situations. The Vipers’ struggles in the red zone continued as the team continues to hold at a hot zero percent success rate when it comes to scoring touchdowns. That included a first and goal at the one-yard line that ended up with nothing. 
170 people are talking about this

Aaron Murray struggled at quarterback in his first start with the team. He hit 16 of 34 passes for 231 yards with no touchdowns and two interceptions. Murray missed last week with a foot injury and is going to be monitored this week. If he can’t go, Quinton Flowers (four of nine, 55 yards, 10 rushes, 49 yards) has split time between running back and quarterback this season. Taylor Cornelius got the start under center in week 2. He completed 16 of 27 passes for 154 yards with no touchdowns and two interceptions. Tampa Bay has a solid 1-2 punch in the ground game as De’Veon Smith (27 carries, 135 yards) and Jacques Patrick (22 carries, 105 yards) are capable of doing damage. Dan Williams is a force to be reckoned with in the passing game as he leads the team with nine receptions for 145 yards. Tight end Nick Truesdell (seven catches, 78 yards), Jalen Tolliver (five receptions, 53 yards) and Reece Horn (eight grabs, 93 yards) are solid secondary targets. Andrew Franks is two of three on field goals with a long of 36 this season. He has accounted for the team’s offensive point production as the team is zero for seven in the red zone this season.

Your feedback is greatly appreciated!